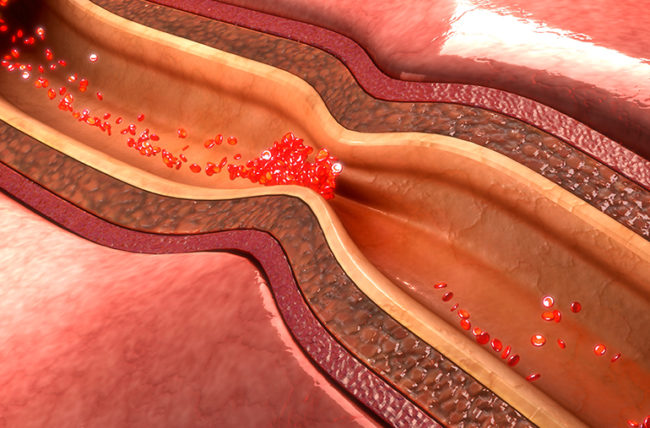 There is a misconception among the general public that he condition known as Blocked Arteries only is caused in older people. However, in many of the cases reported in the past few years, before a general population in their 20s suffers from a clog in their arteries. This ignorance from the condition is the cause that by the time most of us find out that we have blocked arteries, it is too late for the treatment. In order to treat the condition earlier on, the first thing to do is to notice the signs and symptoms of the blocked arteries and need to see a doctor of a majority of these symptoms are experienced.

We care about the health of our readers and this is the reason we made a list of the most common yet dangerous signs we often ignore about the blocked arteries. We also have laid down a few risk factors which a person can take a good look at to change their daily habits for their well being.

Pain in the hips, thighs, or calves

The first major sign of suffering from clogged or blocked arteries is the pain accompanied during normal walking. The reason that pain is experienced is that the legs are not receiving their fair share of blood flow. This condition can lead to symptoms like pain in muscles or cramps in both legs and hands. As for the location of the pain, it is the point where the arteries get clogged due to blood clots.

Chest pain or most commonly known as Angina pain is caused when the human heart does not receive enough blood flow or the blood flow gets obstructed. The symptoms of the chest pain caused due to blocked arteries are as follows.

Chest pain is not experienced when a person is in a resting condition. The pain only starts when the person performs a physical activity or gets emotionally exerted. In some extreme cases of the blocked arteries, the pain of the angina is so massive that it might feel as if a person is experiencing a heart attack.

Loss of vision temporarily in one eye

Carotid arteries are responsible for the supply of blood to both eyes and the brain. If these arteries suffer from blood clot obstruction, it might lead to temporary loss of vision or even blurred vision in the eye of the same side of the brain which experience clogged arteries. A full blockage of the carotid arteries usually ends up in a Stroke. This is why doctors recommend people to be most wary of this vision loss symptom.

Pain in the Lower back

Pain in the lower back is something a person should not take lightly. Due to the blocked arteries in the lower back, the blood flow to the back region gets reduced which results in the disks of the vertebrae to become extremely fragile. These fragile vertebrae disks cause the nerves in the back to feel painful pinching. This pinching in the back is a result of the blocked arteries.

According to multiple studies carried out in developed countries, nearly 10 percent of the total population suffers from extreme artery blockage in the abdominal aorta. The cases have been observed in many people who are in their 20s.

Breath shortness occurs in a person when they suffer from either diseased or damaged coronary arteries. This condition is experienced when the heart loses its full capacity to pump the blood required for the need of the body. According to research on this symptom, people often take the breath shortness as a light thing instead of taking it rather seriously.

Sometimes blocked arteries are not the reason for damaged coronary arteries. A few times there are also many underlying symptoms that result in the coronary artery disease which requires a different treatment altogether.

Cold feet are not just a phrase but also a real medical condition which is usually caused due to PAD (Peripheral Arterial Disease). This problem arises when the arteries that supply the blood to the limbs get narrowed due to blood clots. Common signs of suffering from the cold feet disease are either reduced wound healing or the weaker pulse in the feet. If both or any of the symptoms are experienced, a person needs to consult with a doctor ASAP.

In addition to the feet, PAD also indicates that the arterial blockage disease might be more widespread and it can affect the brain and the heart which might result in either the stroke or the heart attack.

A research paper from Harvard Health Publishing suggests that while the fatigue is the lesser-known and lesser prevalent symptom out of all the symptoms for the Coronary Artery Disease, it is still the one that can occur.

Fatigue, in this case, is usually caused when the body experiences reduced the blood flow which then causes the required oxygen levels in the blood to drop down as well. However, this symptom has been observed to be more common among the female population.

Factors which increase the risk of having blocked arteries

The National Heart, Lung, and Blood Institute pretend a few of the risk factors that increase a person’s chance of developing blocked arteries. We have laid down some of the prevalent risk factors down below for you to keep an eye on and avoid them.