If Your Hands & Feet Change Their Color And Get Numb in the Cold, This Might Be Something Wrong 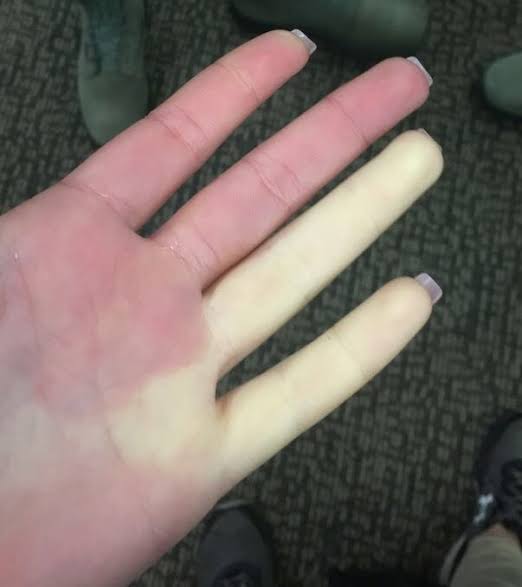 It is a common occurrence that whenever a person goes out into the cold weather without wearing gloves on their hands to keep the cold away, their fingers will soon start to turn white in color as well as have a feeling of needles and pins pricking in them.  That is a normal reaction of the human body to the cold temperatures. Once a person warms up their hands, their colors will start to go normal. This is because the cold tends to slow down the flow of the blood in our hands and feet along with many other regions which cause its color change.

However, in some people, they experience another change in their hands and feet which is a rather serious one and is known as the Raynaud’s disease which is very detrimental to human health.

We learned a great deal about Raynaud’s disease and we wanted to share its symptoms, causes, and ways to prevent it with our readers today.

Raynaud’s disease: What is it?

When the blood flow is resumed in these bodily regions, they revert back to the red color but this process too can be accompanied by intense pain. The minimum time span of this occurrence lasts to about a few seconds to being a few minutes.  However, in extreme cases, this can last up to several hours accompanied by intense pain and numbing effect of the affected body parts.

So far, two causes for the Raynaud’s have been discovered which are as follows.

Primary Cause: the Raynaud’s disease:-

Raynaud’s disease does not require any type of treatment.

Secondary Cause: the Raynaud’s Syndrome:-

Some common causes for Raynaud’s disease have been known to be as follows.

In most cases, the areas affected most by the Raynaud’s syndrome or Raynaud’s disease are the toes of feet and fingers of hands. However, this does not mean that it cannot affect other areas as well such as the nipples, lips, ears, and nose.

Another known cause for Raynaud’s disease is emotional stress but often it is caused due to extreme cold weather.  Under these main causes, the Raynaud’s disease tends to cause the arteries to be narrowed down and have reduced or completely cut off blood supply to certain areas of the body.

This cut off blood supply can lead to the affected body region to have the following symptoms.

How can one prevent an episode of Raynaud`s disease