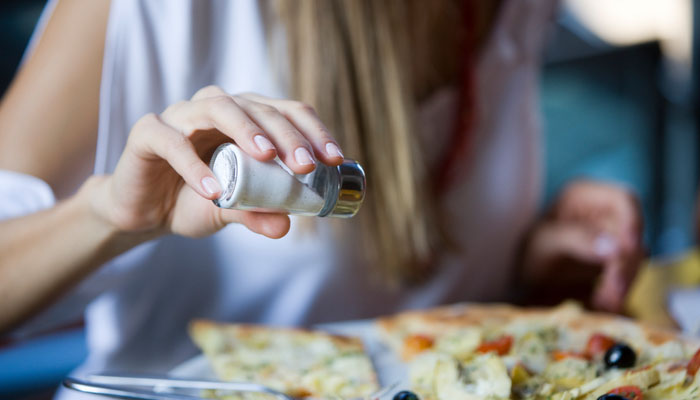 If you are having desires like eating salty foods or chewing the ice all the time, then it is a sign of being concerned because your body might be telling you something. Most of the times, such conditions are a sign that the body is lacking from certain vitamins and minerals. This is why it is a good thing to keep an eye on any of your newly developed habits, especially if these habits start to emerge right off the bat.

Today we have made a list of some of these signs by which the body tells that there is something wrong with your health. Try to take notice if you have any of these habits and consult with a doctor ASAP.

A creeping and crawling feeling in the legs

If a person starts to develop a weird sensation starting in their feet and legs such as something is creeping, crawling or the urge to move around, then this might be the sign of suffering from the Restless Leg Syndrome. This disorder is a long term one and the person often feels discomfort from this disorder during the night when they try to lie on the bed for taking rest or sleep.

If there is one thing that nobody should underestimate about their body is the skin conditions. When out of the blue, your skin starts to turn really thick and starts to itch, this can be the sign of many internal bodily disorders such as the following.

Just to be on the safe side, as soon as you experience skin problems, one must undergo some blood tests. It is best to get these blood works done before the condition gets worse and persistent.

Changes in handwriting, intense dreams and a loss of sense of smell

One must keep an eye if they suddenly start to experience these symptoms in themselves all of a sudden.

Sleeping too much is a disorder which is called Hypersomnia. As per doctors, this disorder does not originate from simply tiredness but can be because of many other bodily disorders. There are some autoimmune disorders that result in the patient having a strong feeling of getting asleep all the time or anywhere. Also, drinking alcoholic beverages right before sleeping can also lead to one having this certain sleeping effect.

In the age group of people whose eyes suddenly start to form a dark grey or a white-colored ring around the cornea of the eyes, this might be a sign that their body is suffering from high cholesterol levels. Still, there is not much to worry about this ring around corneas as it is harmless itself and only causes slight problems in vision.

Most of the time, conditions like low libido, forgetfulness and fatigue are miss-diagnosed with depression. This is because a person suffering from depression also looks really tired and fed up with each and everything in their life and does not have the energy to remember anything. But there is another condition that also causes the same symptoms and it is the disorder with Thyroid Hormone in the human body. This hormone disorder might also result in a person gaining excessive body weight as well as feel cold all the time.

Always a feel of being thirsty

As per specialists, it is normal and in fact a good thing to feel thirsty. But there are still some cases where feeling excessive thirst is associated with a person’s dietary habits. Such habits include eating salty or spicy foods. As for health conditions that cause a feeling of thirst all the time they are either pregnancy or diabetes.

A sudden urge to chew on ice can be explained by medical science as well and this is a bit more than a simple habit. This unusual desire might arise from conditions like Iron deficiency and Anemia as per numerous researches.

If a person suffers from this urge to chew on ice all the time, they need to have some blood tests done on them and take the supplements for treating the underlying conditions.